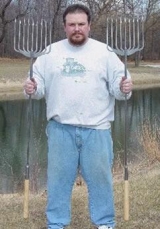 Algonac, Michigan
Since he was 4 or 5 years old, Dave Pawlak (born in 1958) has ice fished with line and spears for pike and perch on Lake St. Clair, the only place on the Great Lakes where one can spear perch. Growing up in Algonac, Dave ice fished with his father in rented canvas and wood shanties far out on Anchor Bay.
About 15 years ago, he decided to make his own ice spears and liked it so much, he’s been making spears ever since. Dave’s spears are collector’s items and used by spear fishers throughout the Great Lakes. He customizes his spears for different kinds of ice fishing around the Lakes, making larger and heavier spears for sturgeon fishing, and longer handles for his Upper Peninsula customers who prefer that feature.  His style of flat, barbed tines made in a set of 4 nested “U” shapes is a trademark. He also stylizes and customizes spears with decorative heads (the weighted part above the tines) and handles. A small, slender perch spear has separate, removable, lightweight tines without barbs.  He takes pains to make a truly local spear that is customized for Lake St. Clair, using only local woods, and stamping each spear with his name and Lake St. Clair, Michigan.
Dave has his own tool and die business where he also creates his spears.  His skills in using metal machine tools are applied to designing and cutting the spear parts. Other steps in the process are done by hand. Dave is known for the quality, artistry, and precision detailing of his metalwork.  Sometimes he collaborates with other artists to provide a finished spear with several decorative components, such as painted or wood burned handles, or decoratively painting the entire spear.  One spear he made is painted like a muskie, another with a Lake St. Clair theme. Most of his work, however, is working spears, both time-consuming, better quality spears, and simpler production spears to meet varying needs. In addition to making spears, Dave has made some metal fish decoys and ice shanties.  His office is a veritable ice fishing and spearing museum, with a collection of old, local spears, ice fishing decoys, mounted trophies from past fishing trips, and a few examples of his own spears surrounding the walls.
Dave is a member of the Michigan Darkhouse Angling Association, a group dedicated to the promotion of dark-house ice fishing. Today Dave takes his own children out fishing, passing on his passion for the tradition of ice fishing to another generation of Lake St. Clair ice fishers.-LuAnne Kozma, fieldworker
Excerpt for Michigan State University Museum