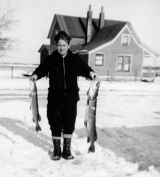 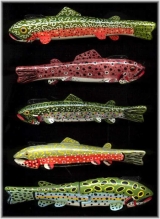 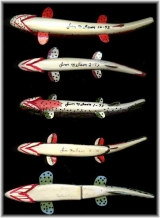 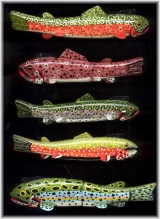 As was typical of many who grew up in Northern Michigan during the Great Depression, Jim carved his first decoy in 1939 when he was just a boy of 12 years old. Cadillac and it’s Lake Mitchell were at the time a hotbed of spearing activity. It must have seemed as though there was a fish decoy carver around every corner, not the least of whom were Oscar Peterson and Jess Ramey. And young Jim had connections to both. Ramey was married to his mother’s sister and his father, Louis, was one of Peterson’s hunting, fishing and drinking buddies. The Peterson brothers, Oscar and George, had a landscaping business that specialized in laying sod. They often hired Nelson’s dad who had a dump truck to haul the sod and help out with the laying. Sometimes Jim helped out too. Although he was able to observe Oscar’s decoy making technique it would be a mistake to say that Peterson taught Nelson to carve. Oscar wasn’t the mentoring sort. Jim learned what he could from observing both Peterson and Ramey and used it to develop his own unique personal style.

Between 1946 and 1951 Jim estimates that he made perhaps 200-300 fish decoys and by 1978 had completed 300-400. During this period he worked at Cadillac Plywood, Cadillac Marine Boat and Kysor Industrial Corp. The bulk of this early production was sold through White’s Hardware in Cadillac for prices ranging from $1.00 to $1.25. Others were sold directly to co-workers on the job. These early decoys were between 5” and 9” long with most being 7” and were made of white pine and painted with enamels. The fins were galvanized metal and the eyes were normally upholstery tacks although Jim did occasionally use glass eyes in the ‘50s. All had curved wooden tails in the Cadillac style and sometimes they exhibited deeply undercut gills. In this period he carved Brown and Brook Trout, suckers, walleye, perch, pike and frog finish decoys. All of these were unsigned.

When Jim, in response to collector interest, began to carve again in the mid ‘80s he pretty much picked up where he left off but soon changed over to glass eyes and aluminum fins. The first of this production was also unsigned but he soon began to sign these new pieces with a simple “James Nelson” written in script on the bottom. Some dealers, however, in an attempt to hide their origin, removed the signatures by sanding them off or by the use of solvents. The market, however, soon evolved to the point where this practice stopped as they realized that they were worth more in their original signed state. Today Nelson signs and dates all of his work taking the guesswork out of determining age. He estimates that to date he has carved over 6,000 fish decoys.

Information above provided by Gary Miller
<michifish@charter.net>
© 1980-2005
This is an excerpt of an up-coming book by Gary Miller on Michigan Carvers

He was a member of the American Fish Decoy Association and has been carving since 1938 when he started with Oscar Peterson and has carved over 6000 decoys through the years. He also enjoyed Ice fishing, spearing, snowmobiling, hunting and traveling and has been to 48 of the states.