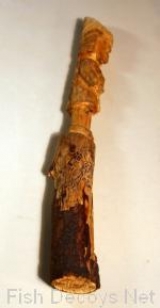 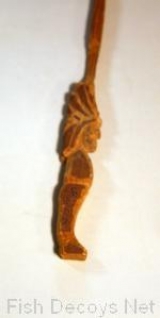 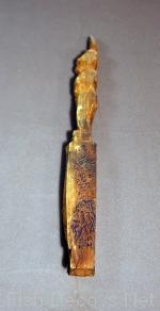 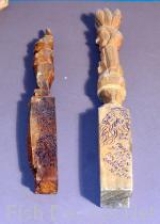 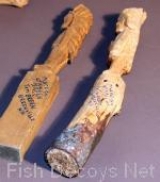 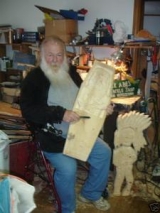 Tom Breen was born in 1938  – died in 2011. He does a multitude of carvings from decoys, signs and Indian items.  He signs his stuff and with his signs he does a little extra on the backs (see photos) You might have seen him at the Brimfield Antique shows.  Tom moved from Greenvile, NH and he lived in Keene New Hampshire until his passing.

He was a fixture at local flea markets and created large chainsaw carvings and signs that can be seen at roadside businesses throughout New England. In later years, he taught himself to paint and produced many folk art pieces that have found their way to places all over the country.

He became very well known in his fields of specialty but was best known for his sense of humor and the fact that he always had a story or joke to make his friends laugh.

He was truly a generous man of many talents and will be missed by his many friends.

“I knew Tom from the many items that I had purchased from him like his signs and some decoys. I spoke to him via phone and email from time to time and truly enjoyed his talks. He taught me over the phone how to paint his style of signs and I am working on perfecting it but Old Tom had a special folk art talent that I can only copy but never master. He was ‘one-of-a-kind’ person and I will miss him.” (fishcritter)

He was raised in Wilton and served in the U.S. Air Force in the late 1950s. After briefly living in Wyoming and Montana, he returned to New Hampshire in the late 1970s and worked as a carpenter, sign painter, and antique dealer. 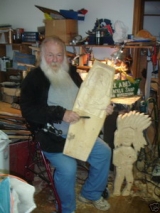 (11/08) I spoke via email with Tom to see how he was doing and as always he had a nice reply about life and this time was no different, so here was today’s reply from Old Tom – “I’m the guy who made everything, but a living.” from Thomas L. Breen’s obit.

Tom’s signs range from 8 inches to over 5 feet and maybe more that I am not aware of. He hand routes the letters with a 1/4″ bit and the signs are semi-carved and nicely painted. 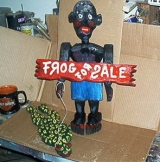 Click here to see the full gallery of Tom’s signs.

The variety that Tom brings to the one-of-a-kind folk art signs with his decoy carving style brings many back to our childhood where signs were handmade and not machine made. Tom’s signs always brings a smile to my face and a wonder where in the world does he keep coming up with the ideas. Keep the folkart coming Tom – Your fan from the fish decoy net – fishcritter.

Morgie lived 210 million years ago and was the world’s first true mammal. So Morgie or the true name of this critter is

Morganucodon. Morgie is a 4 inch shrew like mammal. This is no mere rodent, but the ancestor of today’s more that 5000 species of mammals, including humans.

Now you ask what this has to do with Fish Decoys.

Tom Breen presented me with his rendition of what Morgie was like or would have been like if made as a Fish Decoy. Tom got his idea for Morgie from the Smithsonian issue.

This decoy is about 8 inches long nose to tip of tail and 2 inches tail. The body is about 6″ long and it is weighted in the belly. I have not tested this decoy for swimming, but I believe that it would not swim well. It is carved as one piece and has hat pin eyes with painted red mouth and signed by Tom under the head.

Tom not only does decoys, but signs, metal castings and is considered to be an outstanding OutSider artist.

Some of Old Tom’s Iron Works and door stops.Tom Breen is a self taught folk artist and works in many different mediums and excels in all of his folk art areas.

His items are highly sought after and the price of his items continue to escalate as more and more collectors are finding his work. Here is some of his fish decoy related iron works.  Old Tom Breen made 28 original cast iron doorstops in the 1980s and many now sell in the $2000 – $3000 range. He signed them Indian Summer T Breen or his foundry, which he called Old County Foundry Jaffrey N.H.  He also made the Old Man of the Mountain Doorstop of which he only made 100 and he kept only one for himself. Tom is 68 years old (as of 2006) and has his studio in Greenville, N.H. in the Old Nelson Funeral Home.