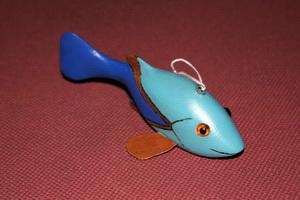 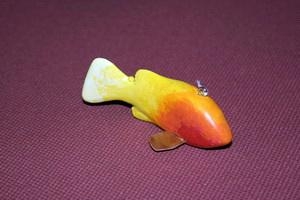 Cody Zitzow is from Moorhead Minnesota. In 2008, Cody showed his carvings at The Gathering show in Perham, Minnesota along with Jay McEvers. As I spoke with Cody and Jay it was evident that Jay had taken Cody under his wing to mentor Cody in fish decoy carvings. As always with the student, styles follow the master and it is no different here with Cody. His style has followed Jay’s style of carving and decorating, but with Cody’s own input to make it his individualistic work of folk art/fish decoy. His fish appear to be well formed and weighted/balanced to be able to properly swim.
Cody signs his decoys with a hand scribed “CCZ ” in the belly by the weight.
Cody’s decoys are strong in color and style. Very nice decoys.

Top – 6″ Long from Cedar w/Glass eyes. Painted with stripe not painted showing the bare cedar wood below. Lightly gouged gills and mouth highlighted with a marker of some sort. Copper fins that appear to be anchored with the belly weight. It has a carved tail and dorsal fins.

4 1/2″ long. Similar construction as above, but without the addition of eyes/gills  or mouth. The coloring of this decoy is such that the features would not seem to be needed. A nice blending of colors fading back towards the tail.
from the Larry Christy’s collection

You can email Cody at crazyman1330@msn.com
or watch for his stuff on eBay ID: crazyman1330