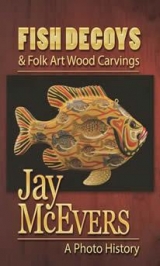 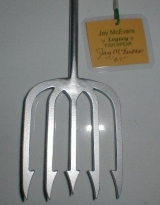 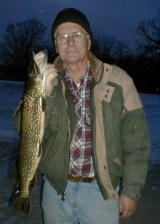 I received my book and wish to thank Jay for putting this definitive listing of his decoys as well as other tidbits.
Jay was selected as Fish Decoys Net Carver of the Month because he has been involved with the craft in not only using it, but promoting the craft every step of the way. He has mentored others including the young to make sure the craft does not disappear. His decoys are both workers and collectable. The quality and artistic features of his decoys are remarkable and make them highly sought after. It is my honor to recognize Jay McEvers for this award.
Jay McEvers was born in 1947 and resides in Vergas, Minnesota.
Jay wrote “
I’ve been carving for 50 years and about 10 years ago. I Worked for Big Sky Carvers in Montana for 7 in the Foredom department, finishing duck, fish and waterfowl decoys. In 1996 I moved back to Minnesota where I was born and raised. Living in the Lakes Country, I met John Jensen. He advised me to start selling my fish decoys.
I enjoy making all types of fish decoys, workers and decorations. A lot of my decoys sport jeweled swim fins, and they have become part of my I.D.”
Jay marks his decoys with a letter J.

Jay went on to say “I have all but retired from competition, but have in the past received world championship status in the Folk Art division in 2000 for a Totem style decoy. Also have won 3 National folk art titles at the John Jenson “The Gathering”. Have also received many other places in these competitions”

(Here is a recent (winter 2008) note from Jay)
“Back out the ice, finally!!!!!! Great ice up here, probably about 8″ now. Set the house in 13 ft. of water. A little deep, but that’s where the sunfish and Bass are holding out. Spearing slow with the water quite cloudy with algae, did get this 29″er last night, will fry her up tonight.”

Photos courtesy of Jay McEvers
You can see more pictures of Jay McEvers Decoys at
http://www.thewaysidechapel.org/JayMcEversFishDecoys.html
Note in Feb. 2012 – Jay wrote on his eBay account “I can never remember what year I ‘ve made any working decoy in, so for this year I’ll be numbering all the working decoys with a 65. Turning 65 on Friday and joining the medicare crowd, Great *^%&%$#^! Sure hope the wheels don’t fall off this broken down old train at the stoke of midnight!!”