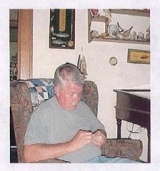 Al Reeg of Bronson Michigan has been carving fish decoys for close to 20 years.  He finds it very challenging to create a unique decoy each time and to keep them from looking alike.
Since the 1970’s collecting fish decoys has become very popular.  They are rarely seen in actual use, but rather displayed in offices, homes and businesses. A collection of Al’s current decoy’s are shown below. This includes his frog decoy from 2001 which he received honorable mention at the World Competition in Livonia, Michigan.

If you would like to see Al’s collection or talk about decoys give him a call or email.
Al makes his decoys the way his ancestors did. He makes them out of samples of wood he has come upon.  Their paint keeps them unique to only them.  Al weights them carefully with lead he melts in his shop.  This balances them for better action in the water when they are worked.

Al’s perfection pays off when making these decoys as he isn’t satisfied until they are done right.
In the old days when the lakes were frozen the spearers took to the ice to bring home supper for their families. A fish decoy was attached to a jigging pole and put into the water.  the spearer would then manipulate the pole to swim in circles or figure eights. This would attract the predator fish and allow the spearer to get his prize.

Al is carrying on this old tradition and hopes his family will carry on his legacy to the future generations.

Al recently competed in the 2004 World Competition at the Great Lakes Decoy Show in Monroe, Michigan and won Second Place for the Critter Competition.