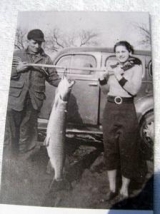 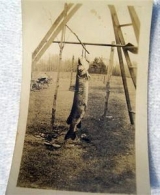 Dennis now hails from North Olmsted, Ohio which is a suburb of Cleveland.
Dennis told me that he went thru a box of packed up decoys and found some that he was sure that I would want to place on Fish Decoys Net(see pictures below).  Dennis also sent some old family photos. A couple of Dennis, his grand-dad (Frank Sladick) & Dennis by the shanty.

Dennis’s mother (Dorothy Sladick & her dad Frank …by the car around 1938.

James Sladick from 1933 with 53″ 45 lb musky.  All the fish were speared in Upper Hamlin Lake – north of Ludington.

Dennis lived in Ludington until 1983 and speared up until that time.  He then moved to Cleveland and then on to West Virginia (working with the Coast Guard) until he retired in 2002.  Dennis entered some decoys in Great Lakes decoy show when it was in Monroe, Michigan for a few years and did O.K.  Dennis said “I guess I like the folk art working class.  Some of the other classes are so realistic I cannot compete. I also make fish boxes.”
Dennis went on to say that in “the old days most of the decoys I used were red, white, or white with a red head.  I remember getting a store bought one each year for Christmas, usually Bear Creek or from the guy down the road at Bob’s Fly Tying & Bait shop.”

He said that “most of the good ones(decoys) are not around as they were the ones that were constantly used and got kicked in the hole, line broke, etc.  Also very few without a tin tail so you could raise it up and bend the tail the other direction to un-knot the line.”
Dennis gave a bit of advise when he sometimes used a live sucker in the corner.  He said to remember to always hit it with the decoy in the tail to make it swim around a bit more.  Dennis reminisced “Those were the days.  Great memories.”
Dennis provided this information and I rewrote it to work with the Fish Decoys Net. I wish to thank Dennis for his story and pictures. He also did decoy boxes and promised to send some pictures of his boxes. I will post them here when I get them.