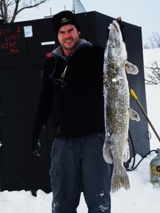 Ryan Gast is from Erskine, MN.   He was born in 1976.
Ryan began spearing as a young child when his father and grandfather would take him out to the different lakes in northwest Minnesota.
Ryan started carving decoys after his father died of cancer in 2001. He found himself having a lot of anxious energy and wanted to keep his hands and mind busy. Tim Nathe and Dennis Bertram were always helpful with his questions about making decoys.
Ryan carves most of his decoys out of cedar and usually has copper fins on each decoy. Every decoy is signed with an ANCHOR mark in memory of his father.
Tradewell Decoys is the name he has given them in memory of his grandfather who was an avid spearer and got him and his father into the sport.