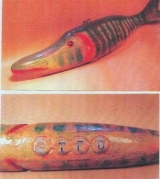 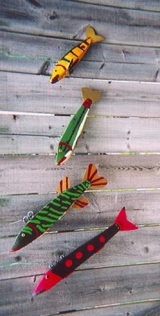 Bob Foster is from West Des Moines, Iowa and styles after carvings from DFD. He signs Bob Foster on bottom of the decoys. Bob was born in late 1937 and was mentored by David Perkins.
Bob wrote ” I have made decoys for several years starting in the early 90s. I sold them at flea markets and to antique dealers. I met Dave Perkins in Oronoco, Minnisota where he bought some of my decoys. Dave has helped me a great deal and gave me constructive criticism on what I was doing right and also the things he liked.  For the last several years I sold everything to Dave. He has been a good loyal and honest friend” – Bob Foster.
After 15 years of carving, Bob still loves to carve fish.
Bob uses a wood rasp, draw knife and rotary tools to make his decoys. He uses a band or coping saw to cut the fish out. He likes using bassbooe, cedar, pine and many times what ever other wood present itself to him. With glass eyes  and carved open mouth, which he paints red  and red carved gills and curved tail his fish decoys seem to come to life.
Bob finishes his decoys in acrylics and lots of varnish. He carves open mouth with wood tails and includes glass eyes. Heavy gauge metal is used for the fins and finishes with very heavy varnish.
At first Bob signed his name with a ball point pen on the bottom, but recently he has switched to stamping BOB FOSTER into the lead on the bottom of the fish. (similar to DFD decoys)
Bob belongs to Great Lakes Fish Decoy Assn (GLFDA) and the NFLCC.
One item Bob mentioned in his letter to me is that he has been mislabeled as being from Minnesota, but to clear the air. Bob said “I have lived in West Des Moines Iowa all of my life.”

Permission for pictures and info by Bob Foster