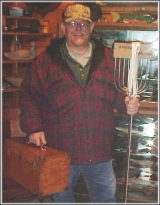 Doug Davis was born in Lake Geneva, Wisconsin and lastly hailed from Williams Bay, Wisconsin and started carving in about 1987. He has won numerous decoy contest in MN, MI, & WI.

It saddens the NFDA to announce that Doug Davis passed away June 7, 2008, after a long and courageous battle with cancer.  Doug was the founder of the “Fish Fry” at the annual “The Gathering” held each year in Perham, MN. His contributions to the NFDA and his friendship will be missed.

Permission to reprint the announcement by webmaster of NFDA.tv website.
Doug started and carried on with the tradition of a great Fish Fry at Perham’s “The Gathering” show each April. I was at the last fish fry and Doug put on a fantastic feed. Thanks Doug and keep up the great work where you are at now. You will be missed.

May he not be forgotten.