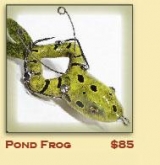 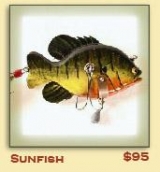 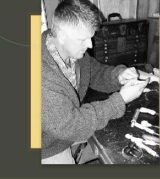 Dean was born in 1960 and he got started in wood carving over 30 years ago (1977). One of Dean’s first projects was a bear and elk. He even carved a chess set in junior high school.
Dean’s grandfather immigrated to the United States from Sweden and he was known as an incredible craftsman and woodworker.  Dean worked with him in his later years and that is where Dean really learned some of the finer points of woodcarving.  Dean told me that he got into fish carving in 1995 making gifts for friends and family. At that time Dean did not try to sell his work, but at one point he took several carved fish decoys and carved lures to a local NFLCC show and they all sold.  This was when Dean realized that other people may want his work.
After that he started taking orders and a few years ago a friend convince him to start a website and Dean said that things really started to take off then.
Dean also enjoys drawing and watercolor painting. Dean said “It is a real pleasure to design all of my decoys.” Dean went on and told me,

“I especially like one-of-a-kind items or special order fish. I carve all types of styles from life-like to folk art themes. All of my decoys are entirely hand painted I have used the airbrush in the past with nice results, but there is something special to me about the traditional hand-painting of decoys.”

Dean uses all types of finishes: from raw paint w/no finish, lacquer, wax, varnish, etc. To him it really depends on what type of look he is after. In folk art he shy’s away from the high gloss finishes that he uses on life-like pieces. Dean is always striving to discover new things in terms of designing, carving, painting and finishing so he can make each decoy a little bit better than the last one.

Dean belongs to the NFLCC and the Coastal Carvers Club, which is a woodcarving club in Oregon. Dean also told me that he never really entered his work in competitions, but his work has been featured in Grays Sporting Journal, Sporting Classics magazine, Hunting & Fishing Collectibles magazine and have been featured on Oregon’s Public Broadcasting television.

Dean sent this photos to me to share with you.

He gets top dollar for his carvings and is evident when you see his decoys.

Each Old Oregon Classic Lure is hand made by Native Oregonian and outdoor enthusiast Dean Crouser. Crouser learned the art of woodcarving in the late 1970’s from his grandfather, a highly skilled craftsman from Sweden who specialized in fine furniture making and clock building.

Dean gets top dollar for his decoys and lures and that will become evident when you see his decoys. Each Old Oregon Classic Lure is hand made by Native Oregonian and outdoor enthusiast Dean Crouser. Crouser learned the art of woodcarving in the late 1970’s from his grandfather, a highly skilled craftsman from Sweden who specialized in fine furniture making and clock building.

When he’s not in the shop, Crouser might be found casting a fly for redside trout on Oregon’s famed Deschutes River, stalking the elusive monster Browns of Paulina Lake or landing a steel-head on nearby Sandy River. His lures and woodcarvings aim to catch the stunning color, form and beauty of fish throughout the northwest and United States.
(This info was excerpted with the permission of Dean Crouser) From “The Register-Guard news ” (Excerpt)

Crouser used to carve chess sets, among other things, with his grandfather, a craftsman who specialized in fine furniture making and clock building.
It started by word of mouth, Crouser says. Somebody bought one. And then somebody else wanted one. “And then another, and another, and another,” he says. Eventually, Crouser, whose full-time job is selling real estate, created a side business.

A fisherman all his life – since his father, Larry Crouser, began taking him as a child to the Deschutes River in Central Oregon, nearby Paulina Lake and the Sandy River – Crouser has passed on his love of fly fishing to Sam and Haley. And he has fond memories of fishing the McKenzie River while attending the University of Oregon.