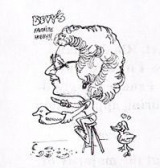 Virginia Beach, Virginia
Bevy was born in Woonsocket, Rhode Island and lived in a number of New England states for the first 25 years of her life.  From her early childhood she has shown her enduring appreciation for nature and all forms of wild life.
From 1958 to 1982 Bevy spent the majority of her time being mother to her four children and supporting her husband Jim’s 26 year Navy Career.
Bevy’s wildlife and conservation work began its active phase in 1972 when she organized and led a waterfowl rescue group to the Eastern Shore of Virginia after a serious oil spill.  In 1975 she applied for and was granted a Federal License to rehabilitate endangered species of birds and waterfowl on her rural property in Virginia Beach, Virginia.  Working closely with the Federal Fish and Wildlife Service she established and funded the first federally licensed sanctuary for injured birds in the city of Virginia Beach.  In 1980 Bevy was honored by the Woodman of The World as “Conservationist of the year”.

Bevy has been a talented painter and artist all of her life.  She started woodcarving in 1976. She began to display and sell her work locally at Wildfowl and Decoy Carving Shows and has sold her work and entered competitive pieces at  Barnegat Bay New Jersey, Easton, MD, Havre De Grace, Md, The World Championships at Ocean City MD. Chincoteague VA. Whitestone, VA, Duck, NC, Nags Head, NC, the North Carolina Championships at Little Washington, NC and the Showcase of Woodcarvings at Charlotte, NC.  Until she retired from competitive carving in 2000 she was a consistent Blue Ribbon winner.  Bevy placed 2nd Best In Show at the “World” in Ocean City, MD and her work is on permanent display at the Virginia Beach Marine Science Museum.  She is a self taught Master Woodcarver and excels in all facets of the wood carving medium, including fish carving, fish decoys, and waterfowl working decoys, decorative highly detailed wildfowl and songbird carvings.  She is also an accomplished award winning carver of caricatures.  Her carvings are held in private collections in the USA and around the world.

Bevy resides in Virginia Beach across the water from the Back Bay National Wildlife Refuge.  Her Studio/Workshop is surrounded by water. It overlooks the Back Bay Refuge marshland, and she is privileged daily to be able to observe and be inspired by Eagles, Osprey, Pelicans, Many Species of Ducks, Fox, Deer and many other forms of wildlife in this unique setting.