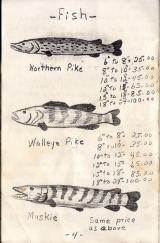 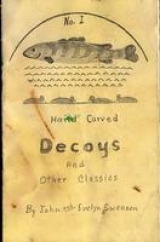 Do you have a Swenson Decoy?

John Lery Swenson (1935-2003) was born in Bagley, Minnesota on April 17, 1935 and he was the 2nd of ten children by Oliver and Edith Swenson of Norwegian descent. Evelyn Rose, wife of John also had carving talents and was born on January 19, 1935 and has German and Irish heritage and was a daughter of Lester Alexander and Edith Schott. John and Evelyn were married in 1953 and were the proud parents of six kids and twenty grandchildren. When at home they called Frazee MN their home and began a full time career in carvings in 1984 while he was recuperating from an accident. They combined carvings are about 200 per year.
New news, Tom Breen located Evelyn and as of 2010 and with God’s blessing is still with us and her phone # is 218-368-6382. She told Tom of John’s demise and he had a few accidents from cutting off his toes with a lawnmower, their house burnt down and then he was in a bad accident. Tom mentioned that his boys has a website on John so when I locate it I will post it here.
They are quite well known for the saying on the back of their van “Do you have a Swenson Decoy”
Click Here to see some of Swenson’s Decoys

Click the Picture to view the entire booklet
Also read about them in the booklet
At Tom Breen’s request; the Swenson’s catalog has been donated to the Minnesota Fishing Museum (www.mnfishingmuseum.com)
This is a short note sent to me from Tom Breen. With hopes in the next couple of weeks I will have more info and pictures on the Swenson’s work. (the note is in Tom’s own writ)
NOW I SEE YOU HAVE JON AND EVELYN SWENSON LISTED BUT NO PIXS. I TRAVELED IN THE ANTIQUE CIRCUIT WITH THE SWENSONS. WE MADE DECOYS IN FLORIDA, TEXAS, PENN. I WEEN TO FRAZEE MINN. AND SPENT A WEEK WITH HIM IN THE 1980S I HAVE A BOOKLET THEY PUT OUT LISTING THEIR ITEMS.IF YOU LIKE I WILL MAIL IT TO YOU AND YOU CAN POST ITON THEIR PAGE.

HE WAS THE CARVER, EVELIN PAINTED THEM. WE STOLE EACH OTHERS IDEAS. I WAS ALWAYS THE INVENTIVE ONE. WE TRAVELED SEVERAL YEARS TOGETHER SHARED MANY A STORY , WHAT A LAUGH OLD JON HAD. ALWAYS WORE A COWBOY HAT. AND HAD A SIGN ON THE BACK OF HIS RIG THAT SAID “DO YOU OWN A SWENSON DECOY YET”WITH A PICTURE OF A BIG FISH. THANKS OLD TOM BREEN

See Article on the Swenson’s in the Decoys Magazine, Pages 44 & 45 of Issue March/April 1993 by K. David Hirschey