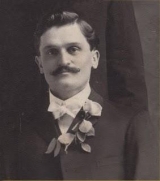 Charles Slechta (Slichta) was born in 1876 in Le Suer County of Minnesota. He worked as a mechanic for the Ford Motor Com.
(Note: Death date in article in incrorrect)

Charlie learned metal working from his father (Charles) which his father learned
in Bohemia before her came to the U.S.  The picture above is of one of his many
decoys.  His brother Thomas loved to fish and used his decoys often.  Tom caught
many fish with the decoys and was featured in Minnesota papers a few times with
( at the time ) a record catch.

some information reported from Paul’s blog located at http://slechtahistory.blogspot.com/2009/12/charlie-slechtas-fishing-decoy.html