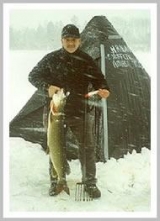 April 2009
Fish Decoys Net Carver Spotlight
Harley Ragan of Chassell, Michigan is one more example of what is called a “Masters of Realism”. He has training as an artist, and has worked in other forms of art before discovering fish decoys. Harley’s fish are impressive in their highly realistic finish alone. Combine this with awesome swimming ability and you see why he was awarded the title of World Champion in August (2001) at the Fish Decoy World Championships in Livonia, Michigan. Harley has consistently created high quality award winning fish. Along with these go some equally impressive “user” fish, that see action each spearing season.