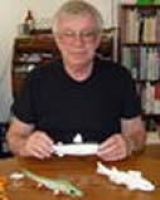 Tom Lorenz was born in 1936.
Tom began carving at age of 10-11 as grandfather and his fishing partner said,’make your own’. They gave good advice and help, times were tough then, so paint was usually a ‘salvage job’ from old cans, use a piece of burlap or if lucky a brush with ‘a bit of stiffness to it’.
Over the years I carved for own use only and a few for friends or fishing partners. As retirement neared I became more serious about it as a vocation. I carve whatever interest me or if I see a photo of a fish or minnow I’ll try to make it. I’ve entered a few fish at the Perham Show and last year won four prizes. Tom is the only one in the family that carves.
Tom told me that the whitefish is on its way to Michigan and the Northern is a 21″ decoy being used by a spearer as he tries for the “big one”.