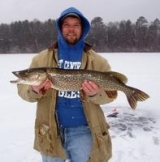 Mr. Kvam is an active member in the NFDA. (the National Fish Decoy Association.
He has won  awards for his carvings at the local, National, and World Championship competitions.
He also placed in the top ten overall in the World Championship Point Standings in 2004.
He also had 9 top five finishes in April 2005 at The John Jensen National Fish Decoy Competition!!
He has decoys on two of the Gathering decoy prints.

In January, Kvam had 5 decoys place in the top five at the Bob Johnson Invitational Decoy Show in Brainerd, MN!!  The pictures can be seen at the NFDA website at www.nfda.tv  If you’d like to see more of his work, click on the carver’s page on the NFDA website!
The John Jensen “Gathering” Fish Decoy Show is coming to Perham, MN on April 8,9, and 10th.  Kvam will be there competing, and visiting with customers, carvers and collectors.
Mr. Kvam hand chip carves with a knife and hand paints his decoys one at a time. They are  individual works of art that are also functional!

Darrin writes:
Hi, I’m Darrin Kvam. I have been a spearfisherman now for about 30 years. I carved working fish decoys when I was in my teens. I started carving again in 2000. I have placed in numerous carving competitions, at the local, National and World Championship levels. I also have decoys on two “Gathering” Prints. Last Spring I placed in the top 10 in the World’s Championship points Standings. I enjoy the competitions, and always look forward to making a better decoy.
Carving decoys relaxes me at the end of the day. I am a second grade teacher, and coach football, basketball and baseball. I am happily married to my wife Jennifer, and we have three beautiful children. I am also a professing Christian, and openly enjoy talking about our Lord and Savior Jesus Christ. He blesses the work of my hands, and I honor him with a fish and cross symbol on the bottom of my decoys.

Darrin’s words of wisdom:
“Remember to run your decoys high, keep your spear on your shoulder, and your foot off the rope.“
(Darrin Kvam)

Darrin Kvam Authorized the information on this page.

Photos are authorized by D. Kvam or belong to Larry Christy
© 2006