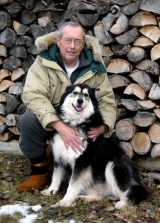 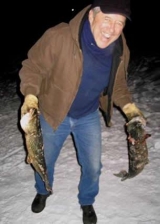 Marvin Johnston was born in 1936 in Detroit Lakes, Minnesota and first went spearing with his grandfather when was 9 years old. Today he still gets the same sense of enjoyment as he did back then and he now spears with is daughter and  his grandson’s enjoying this great sport with them.

In 1949, he and his brother began making spearing decoys for their own use because the store-bought ones weren’t that good and they were (it seemed to them) expensive.
When his grandfather could no longer handle his fish house, it was given to Marv who used it for many years.  Today, his spearing dark-house is an exact copy of that old one complete to the wood-burning stove.
Unlike the dark-house, his decoys have changed a lot.  Back in the 40’s there was only one type of decoy which of course is now called a working decoy.

Marv and his brother experimented with balancing decoys and have enjoyed this hobby all of their life.  Marv has made over 1,000 decoys, starting with the original style wooden working ones which led to winning many blue ribbons and best of show awards at both Minnesota and national decoy shows.
Today, both Marv and his daughter Cheryl, together make Lake Superior Fish Decoys, a very sleek, durable, smooth – swimming, resin shiner and red and white which have been well received by dark-house spearers.
Their plans for next year are to make bait fish decoys which pike like such as perch, suckers and sunfish plus some completely new and innovative decoys.
Marvin has moved from Duluth Minnesota to a small town called Deer River Minnesota and is (in 2008/9) staying with his son-in-law while a new house is being built. His new address is located below.
On March 2009, Marvin wrote that his new house is done and has moved in.
You can read more about Marvin Johnston in Donald J. Petersen’s book “Fish Decoy Makers Past and Present” on page 39 and see examples on page 101.
Marvin signs his decoys M. Johnston on the belly.