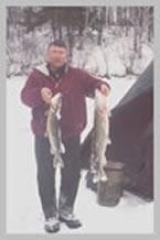 Mike Holmes of Iron Mountain, Michigan is an active spear-fisherman and award winning carver. His years spent in the outdoors as a game warden have influenced his carving style. The fish he carves are very realistic, right down to the individual scales put on even his “user” fish. Some consider him to be one of the “Masters of Realism”. He has a keen eye for detail in carving and paint, but above all his fish are great swimmers.

Mike Holmes was president of the Michigan Darkhouse Angling Association which formed in 2002. He has been carving fish decoys for over twenty years for his own use and for sale to other fishers.

Mike wrote and article on Building a Fish Decoy
http://www.midarkhouse.org/articles/holmes_buildingafishdecoy.htm