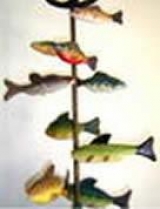 Elwood Fries enjoyed painting and wood crafting during his free time. He
carved and painted at least 100 fish decoys until his wife asked him to stop
because she was concerned with lead fumes.
Listed below are some characteristics of Fries’ decoys:
Eyes are often carved in, but not always.
Eyes are usually yellow with black
pupil and are distinguished by a small white spot of paint at the top of the pupil.
Mouths can be open or closed. Tails are almost always painted a solid color, with a few exceptions.
Belly weights are poured into multiple drilled holes that can vary in size but are almost always less than one-half inch in diameter.
Fins angle downward. His name (FRIES) is carved into the belly of some, but not all.
Line-attachment holes are almost always found in dorsal fin.
Dorsal fin shape can vary, but side-fin style is similar on most of Elwood’s decoys.

He was a member of the Belfast Paint Box Art Club for several years, and was recognized for his painting of the Whitfield House Museum by the Borough of Nazareth during its 250th anniversary celebration in 1990.
From Nazareth Pennsylvania (Navy Veteran of WWII, Member of American Legion Post 470)
Bio & Bottom Photos submitted
by Ken Hedmark
(khedmark@hotmail.com)
12/28/05