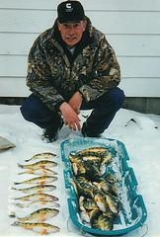 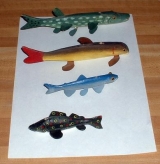 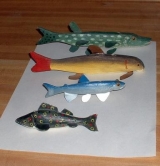 Jim was born in 1954 and is from Algonac, Saint Clair County, Michigan
Jim wrote the following “I got started carving decoys when I started spearing pike after inheriting some spears from my grandfather in the late 1980’s.”
Jim went on to say “I was not happy with commercially available decoys and came across a carving book by James Cottle. After having made a few for myself I started making some for a few of my friends here in Algonac. I have never sold a decoy. I give them away. A few have found their way to other locations around the state. I do not produce them commercially for sale or for competition. They are meant to be fished.“
Jim gave more detailed info on his decoys “I have carved a total of around 100 decoys (2009), maybe a few more. Most of my decoys are from 4 to 8 inches in length. The earlier fish were carved using patterns in Mr. Cottle’s book. More recently I print pictures from the internet to use as patterns.
I have carved a 22 inch brown trout and am making a 16 inch sturgeon spearing decoy for Gil Archambo in Cheboygan.
Some are plain and some a little fancier, all are good swimmers. Wood used is whatever is available. Line ties are generally small screw eyes placed 1/4 of the way back from the front of the decoy. Fins are copper sheeting from scraps left over by roofers and glued in with 2 part epoxy. Eyes are generally plastic and come from the local craft store. The cavity used for weighting is filled with epoxy putty before finishing the decoy. Some are painted with spray paint.
Other decoys meant to be more realistic are finished with artists oil paints. I was on Michigan Out of Doors a few years back shown spearing perch on Lake St. Clair while using some of the decoys I have made.”