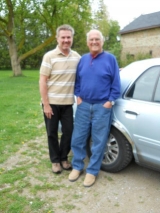 Double “H” (Fish Decoys), Harold Henry Eyre, they call him “Bud”, 77 years old, married 56 years, worked as a cable repairman for Bell Telephone, retired after a 36 year career. Throughout his life he has always been creative and had a second hobby on the go, built the house, furniture, etc, his family grew up with in London, Ontario, raised honey bees, ran a printing press down our basement, built a fishing boat down our basement, had to knock out the basement wall to get it out when finished, built a pop up camping trailer from scratch, hunted, fished, always did sign painting and commercial art before computers, trained standard-bred race horses, still air brushes designs on jockeys helmets, still owns a few race horses, air brushed murals on the side of panel vans back in the hippie days, carved large totem poles from cedar telephone poles, always made hand crafted Christmas gifts, never bought anything new in his life, always bought second hand and repaired it, a very talented man.
He got involved in carving fish decoys about 3 years ago when  his son Mike discovered a market for carving on eBay. He’s a perfectionist, always building jigs/templates etc. to make his carvings better. His work has improved so much there are many collector’s who request custom work from Harold.  Harold enjoys carving decoys now as he’s not as mobile as the younger days.
Behind every good man is a woman, Mary his wife has always been there for Harold and their family members.

Michael Harold Eyre, (MEYRE DECOYS AND LURES) 53 years old, graduated as a Fish and Wildlife Technician 1973 to be a Game Warden, weren’t any jobs so finished 5 years University and taught Science Outdoor Education Horticulture to secondary school students. Taught in New Zealand one year and Australia one year during a 32 yr. teaching career. Retired 2008. Hunted and fished until about age 40, now fishes steel-head trout in the fall and walleye in the spring.
Michael did taxidermy as a hobby for 30 years, raised black labs for 13 years, trained one female, Eyre’s Black Jade, the love of my life, over 2000 hours of training to participate in the field trial champion circuit, she lived to be 16 yes old, after that he spent 13 years growing giant vegetables as a hobby and competition, took top Canadian honors in 1999 for largest giant pumpkin, 764 pounds ,13 foot circumference.
Three years ago, he found a market on eBay for fish carvings, didn’t even know what a fish decoy was at the time. From any profits he has been building up a workshop and carving tools for the past three years, Double H (Harold Henry Eyre), Mike’s father, talk on the phone everyday for about an hour about our current and future carving projects.
We have built up a small following of buyers which inspire us to continue our hobby. Harold sticks pretty much to the traditional game fish, presently working on perfecting detailed gills and realistic paint jobs, Harold teases his son, Mike about his ideas for folk art. Mike’s bragging rights are that he doesn’t use a pencil or pattern or template, he completely carves and paints freehand and usually from memory.
Where do his ideas come from?, He looks at a piece of wood and thru his scrap boxes and goes from there.
Karen his wife is the brains behind their eBay site as she runs the accounting etc.
Some examples of Harold Eyres

Some examples of Mike Eyre’s Lures

Obituary for Harold:
4-09
DOUBLE H (Bud) EYRE Fishing Decoys
Passed Away August 21, 2012
Peacefully surrounded by his family, 80 year old Canadian fish decoy carver, DOUBLE H (Bud) Eyre, father of Meyre Mike Eyre Fish Decoys has passed away. Married to Mary for 60 years, he will dearly be missed by his family and his following of worldwide decoy collectors.
His wish is for me to carry on carving with the Eyreboysnaturecarvings ebay ID name in his rememberance which I will do so proudly as his love for the hobby of fish carving was his passion his last 5 years of life. If you own one of Dad’s carvings, please treasure it as he was too ill the past few months to carve.
Any messages sent to this listing will be printed and given to my mother in his memory, thank you and Mike (Meyre Fish Decoys) will soon be back listing his latest carvings. God Bless and Prayers, Mike Eyre