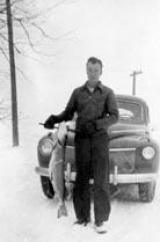 John Ryden is from Aitkin in Northern Minnesota. He was born in 1897 and died in 1982. John created many fish with muted but colorful paints and worked not only in wood, but also in copper. His jigging stick designs were sought after by his friends and fellow fishermen. It is believed that he made for himself and friends and did not sell his creations. Ryden also made some cheaters by hanging hooks on his fish.