Collecting fish decoys can be a be a touchy business for the inexperienced collector. It has only been a few years since there have been any serious attempts to document the various fish decoy carvers, so one must be careful who they are buying from. By their very nature fish decoys are easily reproduced and aged and several carvers are making a good living selling in volume to unscrupulous antique dealers who in turn disperse these repros among the general collecting community. A safe place for a new collector to venture is collecting fish decoys by major tackle companies. These decoys are difficult to reproduce because of their hardware and multi-layer air brushed paint application and they are well documented through the National Fishing Lure Collectors’ Club. Tackle company decoys also offer a strong liquidity since they are eagerly sought after by tackle and sporting collectors. 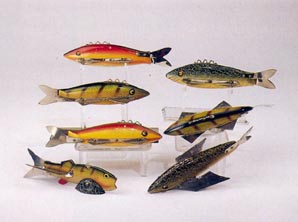 The Heddon & Sons tackle company ,Dowagiac, Michigan offered the spear fisherman the greatest variety of fish decoys. Their first ice spearing fish decoys were offered in sporting catalogs as early as 1913 under the heading “Heddon’s ‘Dowagiac’ Decoy Ice Minnow”. This early decoy was ballasted with lead belly weights in a one piece cedar body complete with wooden tail and was constructed with the same high quality craftsmanship as the entire line of Heddon products. Glass eyes, single nickel/brass side fins, anal and dorsal fins were added to the decoy which was then air brushed with several layers of enamel. By 1916 Heddon was selling their ‘bat wing’ decoy which now sported a metal tail and only large single side fins stamped “Heddon’s Dowagiac” in at least three color finishes; red & white, perch and green crackle back. The bat wing design was replaced by a double side fin decoy by 1923. This new fin design enabled Heddon to use the same fin hardware for several different models of plugs, most notably the “Deep Diving Wiggler #1600 series” where the side fin was folded over the nose of the plug. On the Decoy Ice Minnow, the hardware created two double side fins. This style Heddon fish decoy, offered in several addition color finishes; green scale, yellow perch, rainbow and shiner scale,is the most common and is worth $2000 in mint condition. 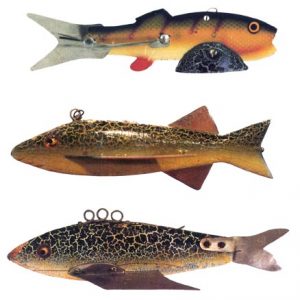 In 1930 Heddon replace their wooden fish decoy with an interestingly designed plastic silhouette decoy called the ‘Ice Spook’. The transparent plastic called ‘Heddylin’ had various color finishes baked into the plastic; transparent body with red and green spots, transparent rainbow, transparent body with gold specks and red head, white head with red decorations , transparent perch and transparent shiner scale. The Spook’s plastic body had one piece nickel hardware that formed side fins and a tail and was mounted onto a large lead belly weight stamped ‘Heddon Ice Spook’. All examples of Heddon’s fish decoy are rare because of their limited production and range in value from $1000 for the Ice Spook to $4000 for early wooden tail decoy. 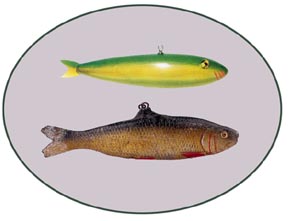 Probably the earliest example of factory fish decoys were produced by the Pflueger Bait Company ( Enterprise Manufacturing Company, Akron, Ohio). Using their patented rubber minnow which was the company’s staple form for fishing plugs, Pflueger first simply added a tie-line holder to the 7 inch model minnow and marketed it as a fish decoy circa 1895. At a later date they improve their rubber decoy’s stability by pushing a single metal hardware through the body to form two side fins. Pflueger also offered a wooden ice decoy in its pre 1900 catalog which was not illustrated. Here again Pflueger adapted it fishing plug to create a fish decoy. A metal tail, glass eyes and single eyescrew for tie-line holder were added to a wood plug body measuring 5 and 3 1/2 inches. Both styles of Pflueger fish decoys were offered in decorated (perch) and silver finish. Pflueger’s decoys are extremely rare. The rubber used hardened with age and became very brittle and few examples of their wood fish decoy have surfaced. The Rubber decoys are valued at $500-1000 and the wooden decoys can easily fetch $1500-2000. 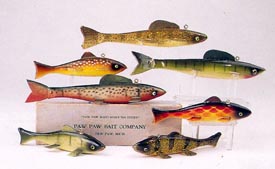 The PawPaw Company which was closely tied to the Moonlight Bait Company started by Horace Ball and Charles Varney of PawPaw Michigan in 1906 closely rivaled Heddon & Sons’ fish decoy line. Although the company’s fish decoys only came in two styles; a 2 3/4 and a 5 inch wooden tailed decoy with carved eyes, four side fins and dorsal fin, the decoys came in a wide variety of colors with and without a finishing coat of silver glitter. In 1935 Moonlight Bait Company was incorporated as the PawPaw Bait Company the design of the wooden tailed Moonlight fish decoy remained the same and production continued. The PawPaw decoys can only be differentiated from the earlier Moonlight decoys by their tack eyes which were inserted prior to applying the multiple coats of enamel found on both versions of the decoys. Any Moonlight or PawPaw fish decoy in excellent condition can be appraised a $500 -1000. 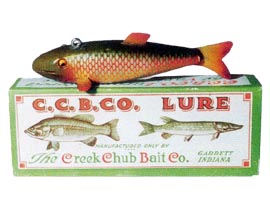 One of the rarest factory fish decoys to find is the wooden spearing decoy made by the Creek Chub Bait Company, Garret, Indiana which was started by Carl Heinzerling, Henry Dills and George Schulthess in 1906. Measuring 3 3/4” this fish decoy was fashioned with a #1500 Injured Minnow lure with added metal tail, side and dorsal fins, glass eyes and a single eyescrew position so the decoy would hang horizontally in the water. Produced circa 1920-1930, there are only a few of these decoys known in collections today and can easily fetch $3000. 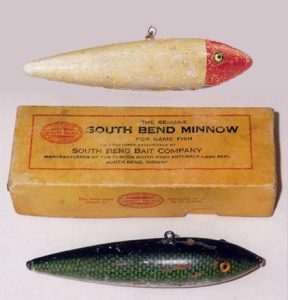 Although not nearly as appealing as the aforementioned ice decoys, the South Bend Bait Company’s fish decoy is also highly prized ($1000) by tackle and decoy collectors. South Bend Bait Company (South Bend, Indiana) introduced their South Bend Ice Fishing Decoy #258 in their 1923 trade catalog. It is basically the same body as their Muskie Casting Minnow with added glass eyes and a single eyescrew/washer with a swivel attached to the top. This simple decoy measures 5 inches and is often mistaken for a casting plug by inexperienced collectors. It was offered in two color finishes, silver with red head and green scale. 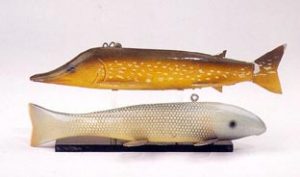 Spearing certain species of fish is still allowed on a very limited basis in some of the northern states and there are still commercial companies which supply fish decoys for these hearty sportsmen. The K & E Company, Hasting Michigan, manufactures the hollow plastic Ice King decoy. The Ice King tradename was first used by the Bear Creek Bait Company from Keleva, Michigan started by brothers, Walter And Elmer Witala and friend Leo Manilla in 1946. These early wooden Ice King decoys are considered collectible. They have distinctive realistic body shape with painted eyes and double side fins. Species like the northern pike also have anal and dorsal metal fins. The painted finishes are not the quality of the early commercial decoys though thus their values average only a few hundred dollars.

Prior to 1960, William Randall produced a line of wooden spearing decoys which included several species native to the Minnesota lakes. The sunfish, bluegill and crappie had curved bodies with wood tails but other species had metal tails added. Randall molded a one piece lead hardware which was fastened to the bottom of his decoys forming double side fins. Randall’s circa 1940 flyer advertised his ‘Deluxe Decoys’ in four different sizes and ten color finishes. Also illustrated were his “Sunfish “(5 inch), “Come-on” Northern in natural pickerel and red head pickerel coloration also the “Golden Sucker” in four sizes; 6, 8, 10, 12 inches. These wooden decoys, which were replaced when Randall switched his production to a line of solid cast metal decoys, are usually valued from $150 for Delux Decoy to $500 for specialty Sunfish, Golden Suckers and “Come On” Northern.

Condition is an important factor in determining the value of ice spearing decoys produced by the major tackle companies. Because these companies used the same high quality marine enamels and multi-layer painting techniques as on their plugs even the tiniest chip in the finish hurts the value of a decoy. Like most early tackle, these decoys were often marketed in boxes and finding the correct box can greatly increase the value of any of these decoys. Tackle collectors often collect color patterns, so certain coloration will also determine the value of a fish decoy. The best advice I have ever heard when collecting is to buy the best you can afford, opting for one great piece over ten average ones. Happy Collecting and be careful you don’t get hooked!